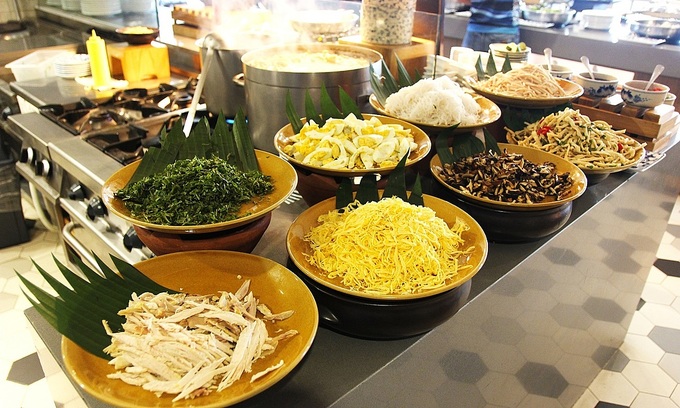 Ingredients for noodle dish 'bun thang' are displayed at Pan Pacific Hotel in Hanoi for SEA Games athletes. Photo courtesy of the hotel Hotels that hosted SEA Games athletes and other officials carefully prepared dishes fitting the diverse tastes and preferences, but guests also enjoyed Vietnamese specialties to the hilt.

At the 31st SEA Games, the men's football teams in Group B – Malaysia, Laos, Thailand, Singapore and Cambodia – stayed at the Nam Cuong hotel in Nam Dinh Province, just two km from the Thien Truong Stadium.

The hotel's kitchen had to serve the five teams with special nutritional requirements keeping in mind their religious faiths and preferences.

Nguyen Van Chien, the hotel's manager, said that the three main meals for the teams were served as a buffet of 60-70 dishes.

For example, the Indonesian team wanted masala fried eggs, which the team leader said suited the nutritional needs of the players. Some of the Indonesian players were Muslims who don’t eat pork, so their meals had to be adjusted accordingly.

For the Thai team, the hotel’s chefs served stir-fried noodles with special spices. Before the meal, the Thai team sent a player to the kitchen to provide guidance and instructions.

Chef Dong Van Quang said that the Thai players ate food that was quite salty and had more requirements to satisfy their taste.

While they got their food cooked to their liking, the Thai team also enjoyed the Vietnamese beef noodle soup pho.

Goalkeeper Kawin Thamsatchanan said he had tried it before and knew pho was a traditional Vietnamese dish. It was delicious and he had it every day when the team was in Nam Dinh.

In addition to the main meal, the teams also needed particular snacks on match days or during training sessions.

Many guests enjoyed Nam Dinh specialties like banh gai (black glutinous rice cake) and peanut candy. After each game, the players returned to their room to relax before having their main meal. Thai defender Krittapot Dangkula said that he was satisfied with the nutrition regime provided by the host country.

In Hanoi, the Pan Pacific Hotel hosted teams participating in the kurash and aerobics competitions and 17 international arbitration teams for a total of about 500 guests from 10 countries including Iran, South Korea, Japan and Malaysia.

The hotel prepares breakfast, lunch and dinner in the form of a buffet with more than 60 European and Asian dishes. Muslim guests were served their own food.

Pho and bun thang were the most favored dishes by foreign athletes, a hotel representative said.

Indonesian Edi Suwarto, a fencing referee at the Games event, said the food was delicious and appetizing.

"I especially like the seafood dishes. The menu here changes every day so I always find it delicious. Thank you for the hospitality and attentiveness," he said.

Travel industry insiders and tourism officials saw the SEA Games as a great opportunity for Vietnam to promote its tourism, including its cuisine.