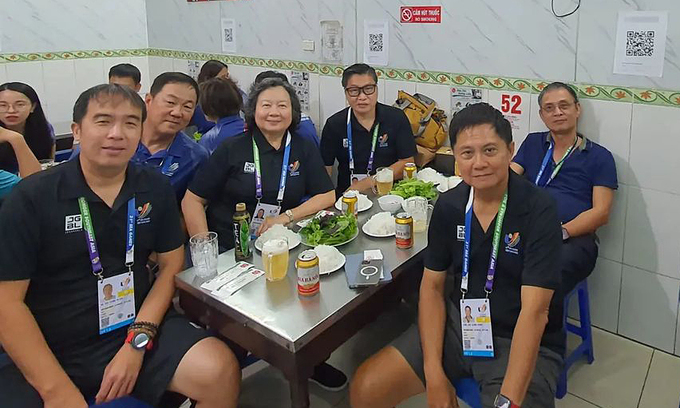 May Schooling, known as Singapore’s most famous mum and a local celebrity, came to Hanoi on May 13 to support her son who won two gold medals in the 100-meter butterfly and 4×100-meter men's relay on Monday night.

She quite liked the eel porridge and stir-fried eel.

"This is the first time I have eaten eel prepared like this, it is suitable for drinking beer," she said.

She was interested in spicy eel vermicelli and chose Ms. Ngo's stall on Minh Khai Street to try this dish.

May also hailed bun thang, sharing that she enjoyed it at the Ba To-Hang Be restaurant.

In the early morning, May enjoyed breakfast like a local including a cup of coffee and bread served with fried egg.

"Good coffee keeps me awake in the morning to cheer up my son," May said.

She was surprised by the restaurant having preserved the things that Obama used during his visit, lending it a global fame.

Her group also sat at a table where Obama did.

Another interesting experience is to try egg coffee at Giang's shop, the most famous address for it.

"In a narrow and dark alley is the best cafe," she said.

May said egg coffee tasted quite unusual but delicious.

Egg coffee starts with a layer of condensed milk at the bottom over which is poured strong black coffee. A whisked egg yolk is placed on top.

It was invented in the 1940s when there was a scarcity of milk in the city, prompting a bartender to use a replacement. The alternative, whisked egg yolk, turned the coffee into one of the most renowned drinks in the country.