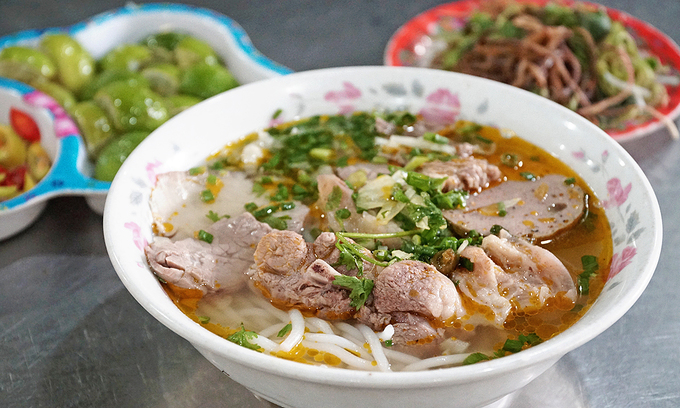 A bowl of beef noodle soup served at a stall in Hue in central Vietnam. Photo by VnExpress/Ngoc Tran The Japanese city of Saijo served school students Hue-style beef noodle soup for lunch this week as part of efforts to deepen their understanding of Vietnam.

Bun bo Hue appeared on the menu at 35 elementary and junior high schools in the city in Ehime prefecture on April 26, Japanese newspaper NHK reported.

City mayor Toshihisa Tamai visited an elementary school on Tuesday and spoke to the students about Hue, which established friendly relations with Saito in 2018.

Around 500 children at the school chose the Vietnamese dish for lunch, Yahoo News reported.

"I find this dish very tasty though a bit spicy," a girl told an interviewer after the meal.

Bun bo Hue is a specialty of Hue, a former citadel in central Vietnam, where it was invented. The broth requires both pig and beef bones to be boiled with a generous dose of lemongrass, sugar, annatto, and shrimp paste. Vendors then add various ingredients like sliced brisket, crab balls and pork pie. Adventurous eaters can also add cubed pig’s blood for even more flavor.

When served, the dish is garnished with a tangle of vegetables like lime, scallions, cilantro, banana blossoms, mint, basil, and Vietnamese coriander.

Toshihisa said the idea of serving the noodle soup was to pique students' interest in Hue and deepen their understanding of Vietnamese culture and cuisine.

Saijo and Hue, a former citadel in central Vietnam, have had cultural and educational exchanges in the last four years.