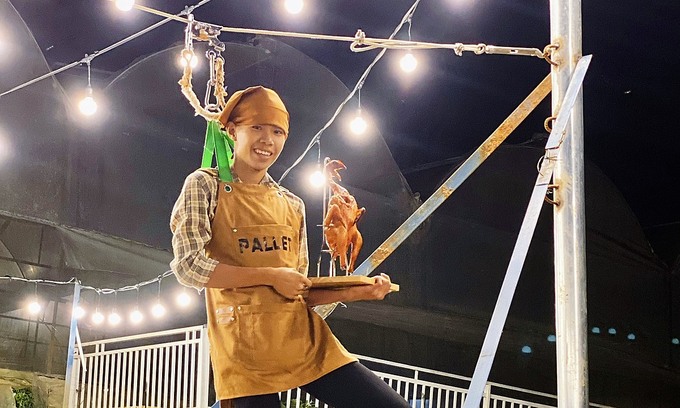 A staff of a restaurant on Trieu Viet Vuong Street in Da Lat lands on a wooden platform after using a long zipline to deliver the grilled chicken to diners. Photo by VnExpress/Tra My Grilled chicken standing upright fly to the table via a zipline in a spacious Da Lat restaurant. Videos of this service have gone viral, garnering publicity for the new eatery.

The restaurant, which opened last month on Trieu Viet Vuong Street in the Central Highlands resort town, covers an area of 2,000 square meters and is capable of serving 600 people at a time, both indoors and outdoors.

For patrons sitting outside, the food, especially grilled chicken, is delivered via a 45-meter-long zipline which has a maximum height of 4.5 meters and a wooden platform for staff to land safely.

Tra My, a local resident, visited the restaurant on April 20 and saw the zipline being used to deliver "flying chickens" to diners. She watched the performance twice and found it very interesting.

"In Da Lat, there are many restaurants with a variety of dishes, but the idea of delivering grilled chicken by zipline is new and will surely attract young people like me," My said.

Tran Thi Minh Ngoc, 33, the owner, said she was surprised at the popularity the restaurant has achieved because of a video showing her staff using the zipline to deliver the grilled chicken went viral on social media.

The video, which has attracted more than 25,000 views on Facebook, also elicited laughter as the chicken "jumps" off the plate on to the floor as the waiter lands.

"On the first opening day, my employee accidentally let the chicken fall off the plate when using the zipline, but everyone was happy and laughed. The restaurant will train staff to avoid similar situations in the future," Ngoc said.

Ngoc said the idea of delivering food by zipline was an innovation she thought would cheer diners and make them smile.