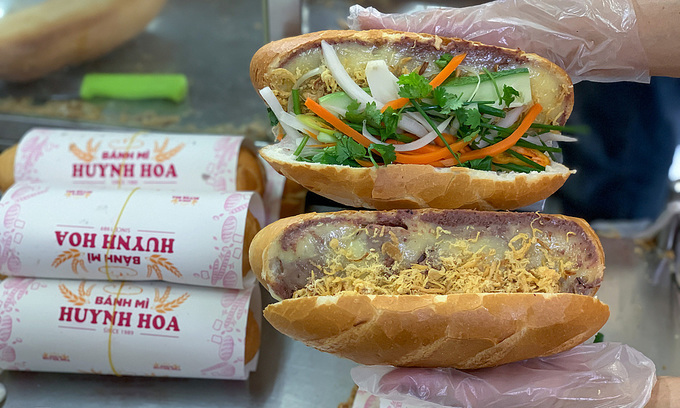 Loafs of banh mi filled with cucumber, pickled carrots and salted shredded pork are served at a stall in HCMC. Photo by VnExpress/Quynh Tran CNN has included Vietnam's popular banh mi in a list of the world's 23 best sandwiches, saying "it is widely loved well beyond the country's borders."

Banh mi is a fusion of cold cuts and vegetables like coriander, cucumber, pickled carrots and daikon combined with condiments from French cuisine like pate and mayonnaise. However, a wide variety of popular fillings are used, including cha lua (Vietnamese pork bologna), fried eggs, grilled pork, and meat balls.

"A culinary remnant of French colonialism, the baguette sandwich was reinterpreted to their own taste by the Vietnamese," CNN said.

"Banh mi are now sold from food carts on nearly every street corner in Ho Chi Minh City and across Vietnam."

Banh mi is a symbol of Vietnam's cuisine and has built quite a global reputation.